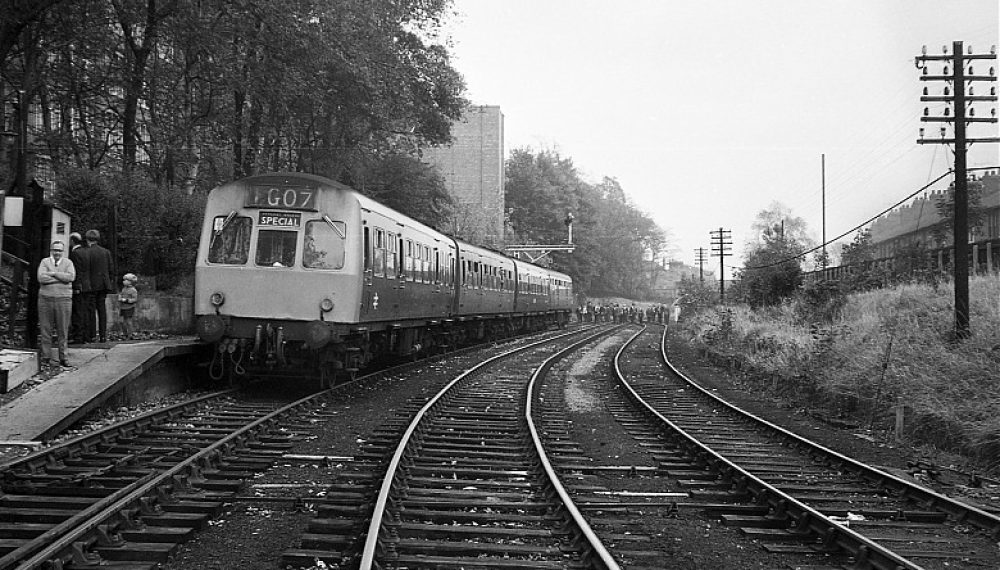 The railway access to the Rowntree’s factory at Haxby Road came from the Foss Island Branch of the NER.

In 1895 Rowntree’s had bought one locomotive and had one-and-a-half miles of standard gauge track. The locomotive was bought second-hand on the 20th December 1890 from Hudswell Clarke and was called ‘Marshall”. This was sold on the 24th September 1895 and a 0-4-0 saddle tank, called ‘Newton’ was bought from T.A. Walker of the Manchester Shipping Canal. It was used for coal shunting at the factory.

Locomotive No.2 was bought in 1909 and was the first new engine Rowntree’s invested in. It went onto shared general duties with a third locomotive bought in 1915.

As the factory developed a station halt was constructed in 1927 at Hambleton Terrace. This was called Rowntree Halt and operated an unadvertised passenger service so that workers from Selby and Doncaster could commute to the factory. The Halt closed on the 8th July 1988 and tracks were lifted by 1992.

A fourth  locomotive, called ‘Swansea’ was bought in 1943 and was extremely old and came in a distinctive green livery.

In January 1972 a substantial reorganisation of the track layout within the Haxby Road factory was completed, using second-hand track bought from the Darlington Railway Plant and Foundry Co. Ltd. This was then laid using existing Rowntree’s staff. In June of that year the British Railway Registration Plates were removed from the trains, meaning that they could only stay within the factory perimeter.

This has to be one of the shortest travelled railtours ever to run on the national network in the UK. The Industrial Railway Society organised the “Rowntree Requiem” to coincide with their AGM which was held in York the same afternoon. The tour started from York at 12.35 and ran to the Rowntree Staff Halt on the Foss Island freight branch arriving at 12.45. It then returned to York at 13.10 with a 13.20 arrival giving a total of 45mins in service and a route mileage of just 2m 48ch (2½ miles) for the round trip. The tour was run to mark the cessation of freight traffic from the Rowntree chocolate factory in York. Up until the demise of the Speedlink wagonload network Rowntree’s of York sent large quantities of finished product out by rail in a fleet of dedicated BR owned VDA box vans. These vans were distinguished from the main fleet by the fact they had white painted roofs to reflect the summer heat and prevent damage to the chocolate while in transit. The final freight ran on 13th March 1987 with this tour following a month later.The private station Rowntree Halt for use of the factory staff was served by the extension of a public service from Doncaster to York in 1987. Train 2T02 the 06.15 Doncaster to York via Selby continued onto the freight branch to terminate at the halt at 07.15. The return working being 2T29 16.35 Rowntree Halt to Doncaster which became a public service from York at 16.42. The loss of the freight traffic meant the line fell into dissuse in 1988 and the factory staff thus lost their private passenger train. Formal closure to all traffic followed on 23/02/1989.