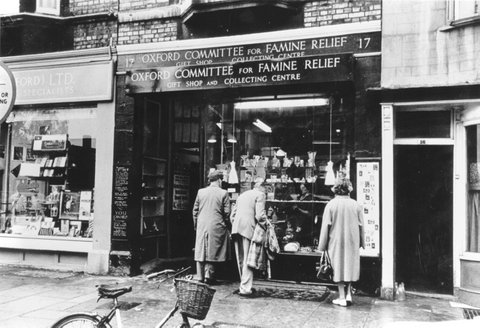 Michael Rowntree was the second youngest of Arnold and May Rowntree’s six children, a family with Quaker Liberal principles and a tradition of public service. He was brought up in York and after Bootham School he went to Oxford, where his studies were interrupted by the outbreak of World War II in 1939.

As a conscientious objector during the war, he joined the Friends’ Ambulance Unit and had almost continuous service abroad, first in Finland and then in the Middle East, where he became leader of the unit attached to a Free French mobile hospital. At the end of the war, he remained in service with the Quakers, helping with reconstruction work. On his return to England in 1946, he started work with the Westminster Press, first in Darlington, learning the business of producing a newspaper. In 1950 he moved to Oxford as Assistant General Manager and then Managing Director of the Oxford Mail & Times.

Michael joined the general committee of Oxfam in 1951 and the Executive committee in 1952 and served almost continuously ever since, including periods as Chairman and Vice Chairman of the Council and Executive Committee.  He was also on various other Oxfam committees including Middle East and North Africa. He took early retirement to allow time for his voluntary work with Oxfam, various Quaker committees and the National Health Service, where he served on the governing body of the Oxford hospitals and later Scarborough Health Authority. He was also a Trustee of the Joseph Rowntree Charitable Trust for more than forty years. Besides his business and charitable work, Michael has always taken an active interest in natural history – as a member of the Oxford Ornithological Society and the Ryedale Natural History Society. He died on 23rd September 2007.

Donate
A fascinating introduction to the historic debate on social vs financial incentives in the workplace - using some of our own Rowntree photographs and drawing on a 1930s study of the Rowntree Cocoa Works in York @rowntreesoc https://t.co/CjMvw4SeYt
@rowntreesoc