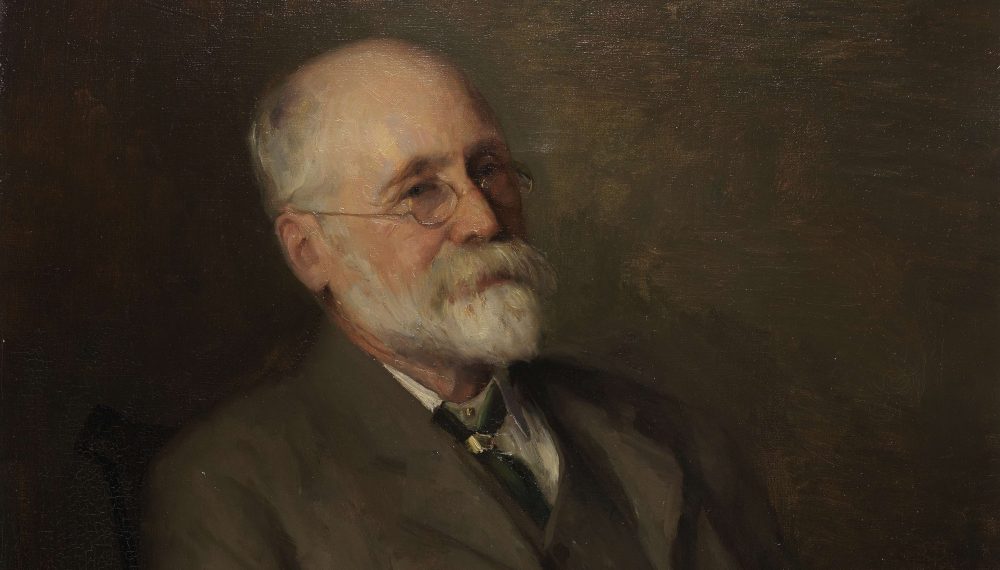 Grocer, cocoa and chocolate manufacturer, social reformer, and philanthropist. He was born at Pavement, in York 24 May 1836. He was the second of the three sons (there was one surviving daughter) of Joseph Rowntree and Sarah Stephenson.  He was educated at Bootham School, where he developed a love of natural history and an informed interest in public affairs. On leaving school Joseph was apprenticed to his father’s grocery business, then spending part of 1857 gaining experience of a grocery establishment in Fenchurch Street, London, before returning to York as a partner in his father’s business.

With the death of their father in 1859 the whole responsibility for the considerable Pavement business fell upon Joseph and his elder brother John, then aged only 23 and 25.  In 1862 Joseph married Julia Elizabeth Seebohm (1841-1863), who died in the following year, a few months after the birth of their daughter, Julia (‘Lilley’), who died in infancy. He married his second wife in 1867. She was Emma Antoinette Seebohm (1846-1924), daughter of Wilhelm Seebohm of Hamburg and a first cousin of Julia Seebohm.  There were four sons and two daughters.

In 1869 Joseph handed the Pavement business to his elder brother and (bringing his capital from that business with him) joined his younger brother, Henry Isaac Rowntree in his newly founded cocoa and chocolate business. His great asset was his sons; John Wilhelm entered the factory in 1885 and Seebohm in 1888.  Trade had improved, business had expanded, and JR was preoccupied with constant piecemeal additions to what had become a rabbit warren of premises: ‘Tanner’s Moat was Hell’, as Seebohm Rowntree recalled in old age. As early as 1866 George Cadbury (1839-1922) had gone to Holland and had bought a machine devised by Van Houten for pressing the fat out of the cocoa bean and thus eliminating the need for potato starch or sago to counteract the fatty taste.

In 1877 Joseph Rowntree also went to Holland, perhaps contemplating a similar purchase, but, from prudence or financial pressure, returning empty-handed.  By the mid-1880s he felt ready to take the risk and eventually Rowntree’s Elect Cocoa was announced in 1887.  This and the gum pastilles were responsible for the growth, between 1883 and 1894, of the number of employees from 200 to 894.

Move of the factory site

In 1890 Joseph Rowntree bought 29 acres of land in Haxby Road for a purpose-built factory, to which raw materials could be brought by a works branch from the North Eastern Railway; it was, however, 16 years before the last department had vacated Tanner’s Moat.  The move to Haxby Road was financed by a loan of £10,000 negotiated with William Morrell, of York City and County Bank, and his son John Bowes Morrell’s traineeship in the firm was arranged at the same time. Joseph had always been chary of advertisements but was persuaded of their necessity and the business rapidly expanded; within eight years the output of Elect Cocoa had risen from 16 hundredweight a year to 26 tons, and by 1902 there were over 2,000 employees.

In 1901 Joseph bought 123 acres at New Earswick, bordering the factory site but further from the city centre. Though York did not have a major slum problem there was substantial housing of such poor quality that it would rapidly deteriorate into a future slum, and Joseph was anxious to demonstrate that well-built houses within the means of men earning 25 shillings a week could be an economic proposition.  It was intended as a social experiment rather than as primarily for the firm’s employees.   By 1904 there were 30 houses, by 1954 nearly 500 three-bedroomed, with 40 somewhat larger and 90 smaller cottages or flats for single people.

Until at least 1880 JR does not appear to have been a teetotaller, though his consumption of alcohol was very moderate.  At Yorkshire Quarterly Meeting in 1889 he countered Friends who claimed that poverty was due solely to ‘the drink’, but he came to suspect that it was a contributory cause and, with Arthur Sherwell, set out to discover some hard facts; these found expression in their The temperance problem and social reform (1899), a book which ran through an enviable number of editions.

Though spending money on books, on travel and on his garden, Joseph had no lavish tastes and was perturbed at his increasing wealth.  In 1904 he set up three trusts: The Joseph Rowntree Village Trust (from 1959, Joseph Rowntree Memorial Trust; from 1990, the Joseph Rowntree Foundation) was concerned in particular with the development and supervision of New Earswick , but was extended to cover housing issues more generally.

The Joseph Rowntree Charitable Trust was for social, charitable and religious purposes, intended to finance such things as social surveys, adult education and Quaker activities.  The Joseph Rowntree Trust Ltd from 1990, Joseph Rowntree Reform Trust Ltd) had power to undertake social and political work, such as Liberalism and the ownership of newspapers, which could not legally be supported from the fund of a charitable trust.

Though steadily distancing himself from full-time involvement in the firm, Joseph Rowntree had been fully active until within five days of his death, which took place at his home, Clifton Lodge, on 24 February 1925.