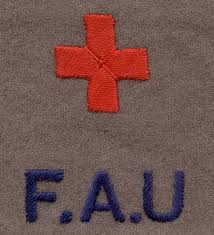 The Friends’ Ambulance Unit was a volunteer ambulance service set up by the Society of Friends in 1914 to help provide opportunities for service for young male Friends during the First World War. In line with the Quaker Peace Testimony, it was mainly staffed by registered conscientious objectors.

Overall it sent more than one thousand men over to France and Belgium, after training at Jordans, Buckinghamshire, a centre for Quakerism.  It was disbanded in 1919.

It was refounded in 1939 by former members and a total of around 1,300 were trained and sent as far and wide as the Middle East and China.