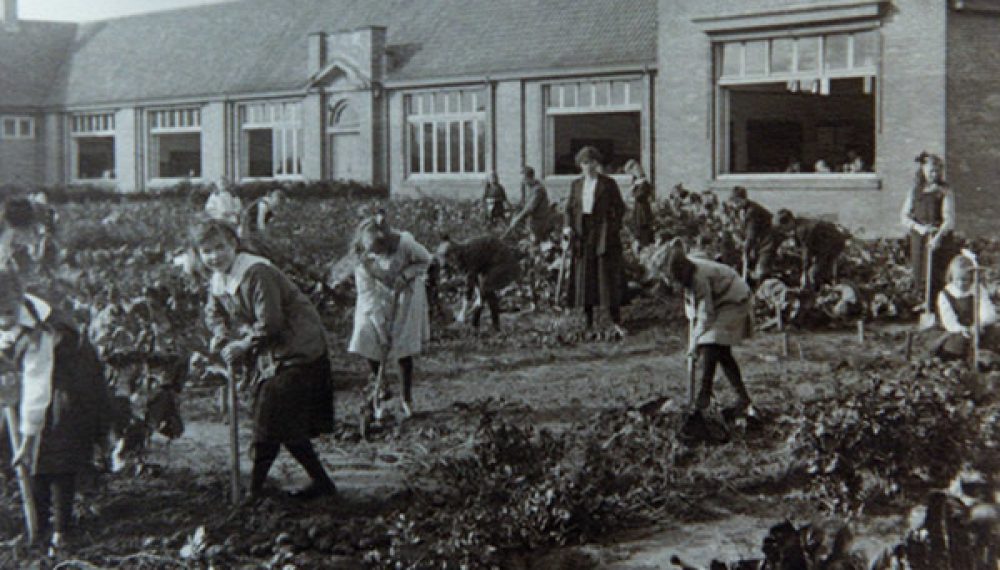 In 1904, Joseph Rowntree set up the Joseph Rowntree Village Trust to manage the new housing development in New Earswick. The village included a ‘non-provided’ school – a partnership between the local authority (which oversaw the education of the children) and the Trust (which funded, designed and constructed the buildings).

New Earswick Elementary School was designed by the famous architects Barry Parker and Raymond Unwin. Like the village, it attracted a lot of outside attention, and was written about in professional journals.* Its pioneering design, with large, south-facing windows to let in light and air, created an ‘open air’ school with more space per child. The school’s curriculum was based on the belief that reading at an early age offered the best opportunity for children to learn for themselves, and boys and girls were taught the same subjects.

The school was formally opened in 1912 by Walter Runciman, a Minister in David Lloyd George’s government. It accommodated 352 children, with pupils right up to 15 years old. The early school community was closely integrated into village life.

At the opening ceremony, Joseph Rowntree established some core principles for the staff. ‘All [the school’s teachers should] be … apt to teach, fond of children … know how to win their respect and affection…[and be able to] secure good discipline by gentle means.’

A major challenge for the school occurred early in World War II as evacuees from Hull and Middlesbrough were billeted with families in New Earswick, nearly doubling the number of pupils. Then in 1942, a senior school was opened to take local children over 11 years old (The Joseph Rowntree Secondary School). Pupil numbers dropped to more manageable levels and the Elementary School was renamed the New Earswick Primary School.

* For example, ‘The Year Book of Open-Air Schools and Children’s Sanatoria’ (ed T N Kelynack, vol. 1, 1915) contains an article on pp. 31–7 by Unwin, ‘Open-Air Education in Relation to School Planning and Construction’ which shows he was getting interested in all that before the war made him focus entirely on housing. It describes inter alia a school Parker &Unwin built at New Earswick, opened 23 Nov 1912, with verandahs all round and S-facing long windows. The Rowntrees had been involved in its design. It followed a P&U school at Letchworth (now demolished).

Unwin writes:’Local authorities who are spending public money can naturally not experiment in the matter of education and school buildings with the freedom which may be adopted by a body like the Joseph Rowntree Trust, but as each new point becomes approved by such experimental aschools as that at New Earswick, the local authorities will be justified in adopting them.’

Unwin visited two schools in Stockholm, one a notable example of Swedish architecture with stair adorned by a fresco painted by the King of Sweden’s brother (an artist, Prince Eugen). The school is most likely Östra Real, Östermalm.