Rowntree’s, York, and the 1918 Flu Pandemic: A New Blog Series

In York, all elementary schools were closed in the first week of July and remained closed throughout the whole summer.[4] Independence Day celebrations planned for American troops stationed in the city – including a baseball match, tea at the Assembly Rooms, and a parade – were all cancelled. Cinemas and other places of entertainment were designated as off-limits for soldiers, though they remained open for civilians.[5] Across the city, trained medical staff struggled to meet increased demand for their skills as they contended with an existing national shortage of doctors and nurses. In January 1918, over half of the country’s doctors were on military duty, and of those remaining, nine in York reported at one point that they had visited 6000 cases between them in response to the outbreak. Edmund Smith, the city’s Minister of Health, reported that “the professional nursing staffs of the city and district were absolutely overwhelmed.[6]

This was the ‘Spanish flu’, so-called because Spain, which remained neutral during the First World War, did not censor news of the epidemic whereas participating nations did. From its origins at a farm in Kansas, USA, the virus spread across the globe, beginning its journey in early March 1918 and ending with the last recorded infection around May 1920. Throughout this period, one in three people on the planet – 500 million – were infected, and one fifth them died.[7] In the UK, a quarter of the British population contracted the virus and one estimate places the national death toll at 228,000.[8] Mortality figures are, however, likely to be underestimates: many deaths will not have been recorded as influenza-related but as pneumonia, tuberculosis, bronchitis or even suicide, all of which were documented secondary complications.[9] The arrival of the virus in England and Wales can be dated around mid-June 1918 and by the end of July, it had diminished. In mid-October, it returned, and this “second peak”, far more deadly than the first, lasted until the end of the year, only to be followed by a third wave between February and May 1919.[10] 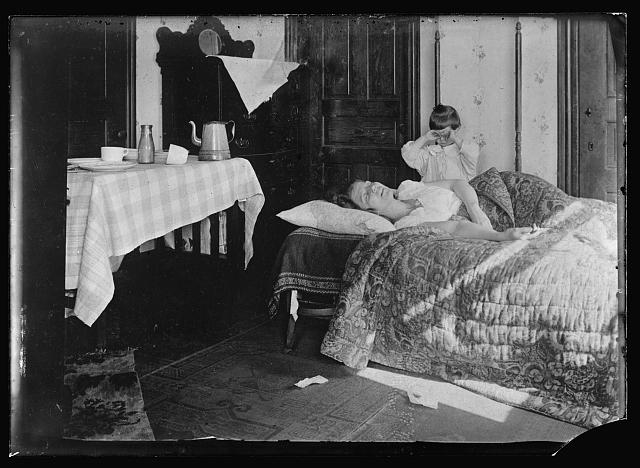 Those of us with an interest in social history might some highlight key factors at play which sound familiar in the context of today’s crisis. People of all social backgrounds were susceptible to the 1918 virus. Yet, there is evidence to suggest that working class communities and those living in poverty were hit particularly hard and their experiences under-documented. In addition, the history of the pandemic is, at least in part, a history of care work, and the history of care work is predominantly the history of another marginalised group: women. “Women were the ones who registered the sights and sounds of the sickroom, who laid out the dead and took in the orphans”, notes historian Laura Spinney.

I took up the post of Director of The Rowntree Society in early February this year and over the last few weeks, have began the work of immersing myself in the rich histories and legacies of the Rowntree family, company and charities. The Society exists to facilitate and support activities that engage critically and creatively with these histories through collaborative work with partners in the public sector, education, the voluntary sector and the cultural industries. Our work is driven by our belief in the continuing importance of the Rowntree legacies to the local, national and global challenges facing our contemporary world. As the world entered lockdown, it became clear that the COVID-19 pandemic is not just one of the most pressing of these challenges, but that it has profound implications for the others.

Members of the Rowntree family undertook pioneering work driven by their Quaker values, advocating for equality, democracy and social justice; work which is continued today by the three charitable trusts Joseph Rowntree established in his name in 1904. At The Rowntree Society, we believe that historical perspectives have a distinctive role to play in helping to navigate the current crisis and uncertain future. We share the perspectives of the Social History Society on the distinctive contributions historians can make in navigating the complexities of our situation:

The fullest answers to these questions lie in the archives. The Borthwick Institute at the University of York is now home to the Rowntree Archives, and an important collection of materials relating to medicine and health in the city. Other relevant records are kept by York Libraries and Archives. Both are currently closed due to the lockdown (though doing some fantastic work around the continuation of their services online). It’s tantalising to have these documents so near and yet so far, and I’ve developed a renewed appreciation for our libraries and archives now that they are temporarily inaccessible.

In the meantime, we’d love to hear what you think. You can get in touch with us via email at info@rowntreesoc.org.uk, on Twitter @rowntreesoc, or through our Facebook page.