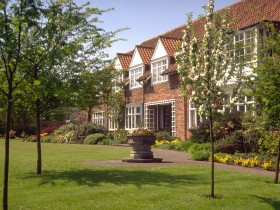 The house, an example of the Arts and Crafts style, was built for Seebohm Rowntree, his wife Lydia (Potter) and family. The architect was Fred Rowntree.

The 1911 census describes the house as having eighteen rooms and housing Seebohm, Lydia, Joseph (aged 12), Peter (aged 10), Mary (aged 7) and Philip (aged 4), five female domestic servants and a Nursery Governess. In 1916, a handwritten letter dated 28 November from Lydia to her husband at Whitehall describes a Zeppelin raid on York as seen from the Homestead.

During 1935, his last year in the house, Seebohm directed his second poverty survey of York (‘Progress & Poverty’, published 1941) from the two library rooms of the house, employing three researchers and two typists. In 1936 he moved to North Dean, High Wycombe, and sold the property to the Joseph Rowntree Village Trust (now the Joseph Rowntree Foundation) at site value, on condition that the gardens be maintained as a public park.

Seebohm’s son, Peter Rowntree, a Director of the Rowntree Company, lived in the house with his family as the Trust’s tenants until 1978.  He oversaw the park during his tenancy and up to around 1960 had a market garden on land. On 29th April 1942, the house and park were severely damaged in a German air raid.

In 1977-78 the house was converted to the head office of Rowntree Mackintosh Ltd., who purchased the leasehold with restrictions on its disposal. Restoration and additional building work was carried out by Shepherds of York for Richard Fraser of the Louis de Soissons Partnership. In 1988 Nestlé took over Rowntree Mackintosh and the company offices were moved back to Haxby Road.

In 1990 the Joseph Rowntree Memorial Trust changed its name to the Joseph Rowntree Foundation and moved its main offices from Beverley House on Shipton Road to The Homestead. What is now the footpath to the park from Water End was once the only entrance to both Seebohm’s home and the park – originally a driveway through an established orchard.  The Shipton Road entrance and car park was constructed in the late 1970’s.