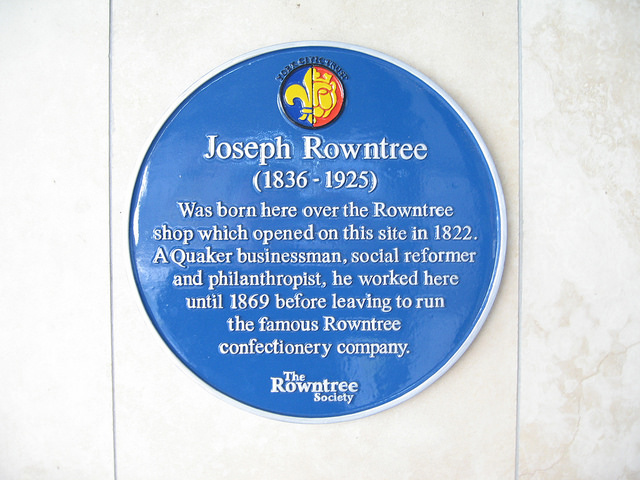 The location in York of Joseph Rowntree’s (Senior) (1801-1859) original grocer’s shop at 28 Pavement, York, where many apprentices lived and worked, including George Cadbury. Purchased in 1822, it was also the birthplace of all the Rowntree boys, John, Joseph, and Henry. Joseph Senior came to York on his 21st birthday to attend an auction at The Elephant and Castle Inn in Skeldergate with the intention of purchasing a property in York and even had to sober up the auctioneer by putting his head in a bucket of water. The Rowntree family moved out to Blossom Street in 1845.

1823: ‘Joseph Rowntree Grocer and Tea dealer’ – registered at this address.

1851: A manager with eight apprentices and four to five domestic servants at 28 Pavement.

1858: Business at 28 Pavement known as Rowntree & Sons: (the sons being John and Joseph junior).

1892: Firm taken over by Thomas Coning of 39 Goodramgate who kept Rowntree name.

1932: Street numbers are changed in Pavement.

1985: Vacant and under alteration.