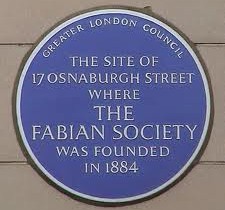 The Fabian Society was founded in 1884, a socialist organisation that advocated gradual reforming change, rather than revolutionary change.

The York branch, formed in May 1908, was founded by Frank Rowntree, nephew of Joseph Rowntree and a Director of the Cocoa factory and Bruno Lasker, amongst others, according to the latter’s Reminiscences.  Lasker worked as an Assistant to Frank’s cousin and neighbour, Benjamin Seebohm Rowntree, from October 1907.  Although his Uncle Joseph and many of the York Rowntrees were Liberal Party members, Frank was a committed Socialist, according to Lasker. In fact, a 1911 report on the York branch of Fabians stated that ‘The Society is run mainly by Frank Rowntree.  It is entirely middle class and works with the ILP and Labour Party.’

During its first year, the York Fabian Society had around 30 members. It had held a course of lectures, outdoor meetings and a major gathering that featured G. Bernard Shaw, who had also addressed large provincial meetings in Liverpool, Edinburgh, Hull and Portsmouth as well as York.  The local York Gazetteof 7th November 1908, featured an article about a Fabian Society lecture held in the city with Mr G Holbrook Jackson as speaker and presided over by Frank H Rowntree.  The society appeared to be thriving in 1911, the annual report stating that four well-attended lectures drew between 200-300 people.