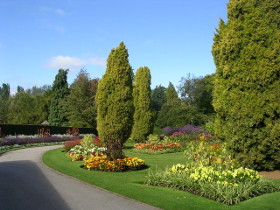 A park in Clifton, today the only open space to the north of the City available for children’s play. It consists of six acres of flower and rose gardens, a rockery, an ornamental lake and a children’s playground. It was little more than a field when first opened to the public.

On 27th July 1908, the Hungate area of York organized a children’s carnival which ended up at the Homestead for a garden party. A paddling pool was opened in the summer of 1954, but is no longer used. At one time, two student teachers or games instructors were employed during the summer holidays and the whole of the grounds were reserved for school children. On Wednesdays and Saturdays during summer months, the gardens often used to be closed to the public so that social, educational, philanthropic and religious organizations could have sole use for garden parties.

A Monkey House and Aviary existed in the park until they were destroyed during a wartime air raid in April 1942, which also destroyed greenhouses and damaged the rock garden. Most of the monkeys were killed during the air raid and the monkey house was subsequently converted to grow vines. The trees in the cherry avenue were planted around 1910. The site of the children’s play area was originally part of the Haverford (Youth Hostel grounds) and purchased from Henry Hillyard in 1905. The playground was originally closed on Sundays so that the park could be ‘a quiet garden’ for those who wish to walk or sit there.

The Pavillion was designed by Fred Rowntree in 1908, and equipped with tables and chairs and used constantly by young people’s organisations for their regular meetings, for lectures, business meetings or discussions; at one time an average of 36 difference organizations held meetings in the Pavillion.  The Pavillion is now incorporated into the Joseph Rowntree Foundation’s office accommodation.

After the war potential gardeners were offered up to £4 a week so that ‘suitable men’ could be employed. Peter Rowntree met his second wife, Eve Graham, while she was working at the Homestead in 1947 for the Quaker Backhouse Nursery firm. Between 1945 and 1991, there were two Head Gardeners: John Lewis and Charles Alcorn. Between the 1920s and 1951, what is now the picnic area was occupied by the Clifton Fruit Co., which provided a popular source of fruit, flowers and vegetables for local people.

Access to the park was improved for people from south of the River Ouse when the Clifton bridge was officially opened on 28 October 1963. The bridge was built from 4,000 tons of concrete and 50 tons of reinforced steel and built slightly upstream from the site of the old ferry crossing. A couple of years previously, the Army built a temporary partly as a trial for a permanent bridge and partly to ease traffic flow for the wedding of the Duchess of Kent at York Minster. Today the park is owned and managed by the Joseph Rowntree Foundation.