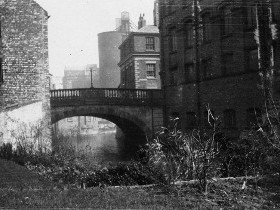 One of the main roads out of York, leading from Pavement to Walmgate Bar. It was the boundary of the commercial centre and one of the poorest areas of York. The narrow Foss bridge crosses the river, built in 1811. Joseph Rowntree said of this bridge that he used to run over it as a child to avoid the stench of the sewage.

Seebohm Rowntree’s map in Poverty of this area shows the density of the public houses in this area. ‘There are 39 public houses in the district, 1 for every 174 of the population…the river Foss which runs through the district often becomes more or less stagnant and unsavoury in the summertime…many of the yards in courts are unpaved, and the brick ash pits and midden privies, cleared only at rare intervals, abound.’ The Blue Bell Inn is one surviving example of an original pub on this road.