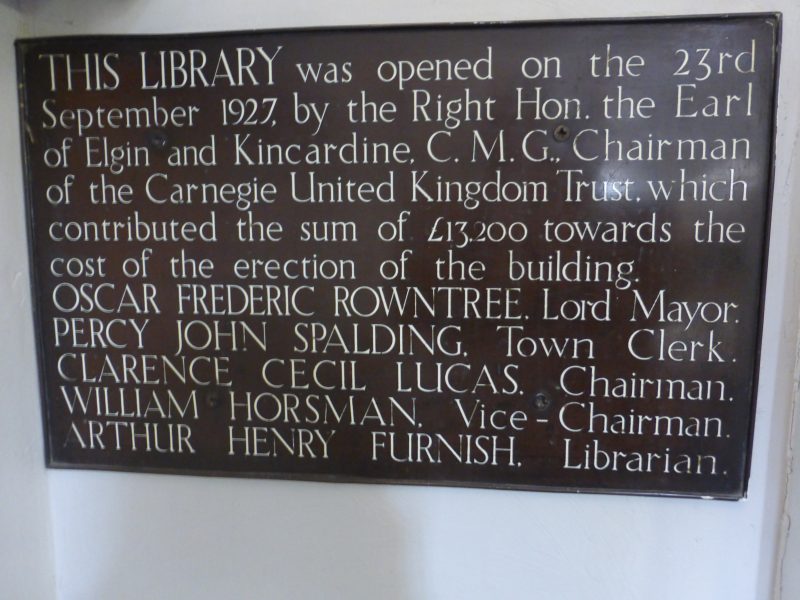 Suggestions for a public library in York were first made in 1863, then in 1867 in the York Herald. When John Stephenson Rowntree was Lord Mayor in 1881 he again pushed for a library, supported by Joseph Terry. Local opposition was strong, some suggesting that York had morally and intellectually stimulating resources in plenty already and the money should be spent on bridges rather than providing free newspapers for York’s Irish citizens.

In 1887 at Queen Victoria’s jubilee money was raised for the Art Gallery in Exhibition Square and a library was opened at the Institute buildings in Clifford Street, still against local opposition. William Morrell made further appeals and funds were raised, with the first library opening in 1891 with 4,000 volumes. Financial difficulties in the early years were eased by the donation of collections by John Stephenson Rowntree and William Morrell.

In 1903 Andrew Carnegie made an offer to build a library and in 1919 under the Public Libraries Act, the penny limitation was abolished. Eventually, a new library was built by the architect Walter Brierley, and it opened on the present site on Museum Street in 1927, on land formerly occupied by stables. The opening ceremony was presided over by the Earl of Elgin and Kincardine, attended by Oscar Frederick Rowntree, then Lord Mayor.