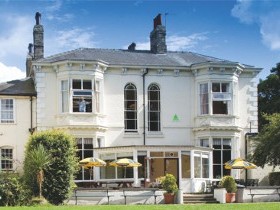 Built by William Catton, a woollen draper, whose family sold it to Henry Hillyard at the end of 19th century. In 1905, Seebohm Rowntree purchased about 3 acres of land behind Cliff Villa from Hillyard. The house Cliff Villa was renamed after Haverford College in Pennsylvania, in memory of John Wilhelm Rowntree who was buried there in 1905.

The 1911 census records Francis (Frank) Henry Rowntree and his wife Emily living at the property with a cook, housemaid and under-housemaid. The house is said to have had twelve rooms and the couple had four daughters (who are not given as being in the house at the time of the census): Frieda (later Mrs George Harrris), Faith, Maud (Madge) and Norah (Nonie).

In 1945 the Francis H Rowntree trust sold the property to the Joseph Rowntree Village Trust, who then leased it to the Youth Hostel Association. The building was damaged by an air raid in 1941. It has been enlarged and adapted over the years, but it still retains its character as a family residence, and there are plaques internally that commemorate the building’s Rowntree connections. The gardens are still managed by the Joseph Rowntree Foundation’s gardeners.