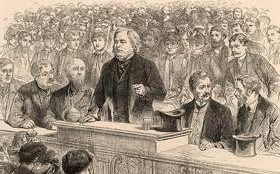 John Bright (1811-1889), born in Rochdale, Lancashire was a liberal statesmen and a strong critic of British Foreign Policy. He spent two years at Bootham School, where the library is named after him. A great orator, together with Richard Cobden, he was a key advocate in the campaign to have the Corn Laws repealed.

Donate
@ChocolateLoveTO @jrf_uk @jrct_uk @JRRT1904 Thank you. We recognise this too. It has always been clear that the company operated during the period of colonialism, but this can also feel like new info. Catherine Hall's descriptions of 'knowing and not knowing' & 'turning a blind eye' feel helpful in capturing this duality.
@rowntreesoc